How Data Center Operations are Affected by Downtime Costs

Downtime is not a word that data center operations strategists like to hear, but it’s one of the most important considerations for the effective planning and operation of a data center. Eliminating unplanned downtime is critical to keep business-critical services available, driving across-the-board productivity, and maximizing ROI. It also enables service providers to field more competitive service-level agreement contracts, and gives anxious tenants peace of mind knowing that their valuable applications and networks will be protected, available, and disaster-proof.

Data center operations strategists should also consider the costs of downtime, especially when that the amount of money sacrificed to unplanned downtime continues to rise. According to a recent survey conducted by the Ponemon Institute and Emerson Network Power, unplanned downtime costs organizations an average of $7,900 per minute in 2013. The survey compiled responses from 67 data centers at least 2,500 square feet in size, from all over the U.S. and in different industry sectors.

A quick rundown of what they found:

The survey also found that the companies that depend on data center uptime the most – those in the telecommunications, e-commerce and information security sectors – suffer from the highest downtime-related costs.

“Given the fact that today’s data center operations support more critical, interdependent devices and IT systems than ever before, most would expect a rise in the cost of an unplanned data center outage compared to 2010. However, the 41% increase was higher than expected,” stated Larry Ponemon, chairman and founder of the Ponemon Institute. “This increase in cost underscores the importance for organizations to make it a priority to minimize the risk of downtime that can potentially cost thousands of dollars per minute.

Effectively mitigating downtime is both a practical issue and a philosophical one. Organizations need to approach data center operation planning with a mixture of ideological tactics and technological developments. Cooling, redundancy, virtualized backup systems, even investing in IT equipment can all help enhance data center operations, reducing downtime. The use of big data in identifying the root causes of downtime can be one way that organizations can better target the issues that lead to downtime, according to Emerson Network Power vice president Blake Carlson.

“As data centers have become more complex, the need for real-time visibility gained through the consolidating and analyzing data across systems has increased; it’s not just about ‘big’ data, but also ‘fast’ data,” Carlson wrote. “Gaining control of the infrastructure environment leads to an optimized data center that improves system availability and energy efficiency.”

Some of the areas in which big data can be leveraged for more insight over data center operations and functionality include real-time monitoring of asset performance, which allows for better management of cooling and load-balancing technologies, and granular energy evaluations for more targeted improvements. 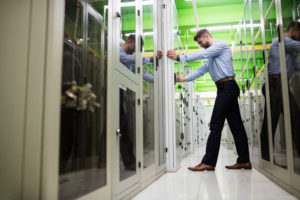 Designing the modern data center begins with the careful placement of “good bones.” Data center network architecture must be highly adaptive, as managers must essentially predict the future in order to create physical spaces that accommodate rapidly evolving tech. Those with the best foresight on trends (including AI, multicloud, edge computing, and digital transformation) are the most successful.

Data center managers and operators know the looming threat of unnecessary downtime well. Despite technological advances in the IT infrastructure space, they are a common phenomenon. The Ponemon Institute placed the cost of a minute of downtime in the data center at $5,600 in 2010 and at $7,900 in 2013. That has now risen to an average of over $8,000 per minute. For the Fortune 100, the loss of unplanned downtime costs as much as $2.5 billion annually.