How much is Data Center Network Downtime Costing You?

The old adage, you cannot manage what you don’t measure is particularly true when considering the cost of data center downtime. Until recently it was widely accepted and known by the data center community that the price of downtime was both enormously high and incredibly significant, but there wasn’t’t really a way to measure the impact. Emerson Network Power, however, took it upon themselves to find and quantify an answer to the ever looming industry question; just how much is data center downtime costing you?

In September 2010 a study commissioned by Emerson Network Power, was initiated by the Ponemon Institute in an attempt to uncover the costs and causes associated with data center downtime.

The study included data center professionals from 41 independent facilities located across the United States. Participating data centers represented a wide variety of industry segments, including financial services, telecommunications, retail (conventional and e-commerce), health care, government and third-party IT services; to ensure that costs were representative of an average enterprise data center operation. Participating data centers were also required to have a minimum square-footage of 2,500 ft.

Even more frightening, based on an average reported incident length of 90 minutes, the average cost of a single downtime event was approximately $505,500. These costs are based on a variety of factors, including but not limited to data loss or corruption, productivity losses, equipment damage, root-cause detection and recovery actions, legal and regulatory repercussions, revenue loss and long-term repercussions on reputation and trust among key stakeholders.

When considering that the typical data center in the United States experiences an average of two downtime events over the course of two years, the costs of downtime for an average data center can easily surpass $1 million in less than two years’ time.

Even worse, for enterprises with revenue models that depend solely on the data centers’ ability to deliver IT and networking services to customers, downtime can be particularly costly, with the highest cost of a single event topping $1 million (more than $11,000 per minute). In total, the cost of the most recent downtime events for the 41 participating data centers totaled $20,735,602.

In addition to vulnerabilities in the data center’s power and cooling infrastructure, accidents and human errors also can also cause costly downtime events. 24 percent of study respondents cited human error as the primary cause of their most recent downtime event, accounting for nearly $300,000 per incident. Over a period of ten years, downtime events related to human errors and/or accidents can easily cost an organization in excess of $600,000.

Fortunately, best practices to minimize the risk of data center downtime events caused by human error are among the least expensive to implement. As explained in the white paper “Addressing the Leading Root Causes of Downtime,” recommended actions for minimizing the occurrence of human errors and Accidental Emergency Power Off (EPO) events include:

Considering the white paper’s recommendation list, it makes sense for a data center to employ the use of a ServerLIFT. It promotes consistency in standards of operation and both reduces the time needed and risks involved in replacing equipment. Not only does it minimize human error, it assists in reducing downtime. Without a plan and a method in place to conduct a server move during this critical time, the deployment process has the potential to slow down the entire operation, increasing downtime, which in turn costs more money.

According to experts from Emerson Network Power’s Liebert Services business, implementing these recommended actions would cost approximately $3,500. When considering the high overall cost of downtime, such investments represent a nominal cost that can easily achieve an ROI of more than a hundred-fold by preventing a single error or accident. 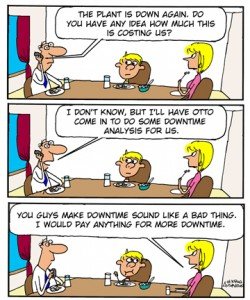 To put all of these calculations into greater perspective; vulnerabilities in a data center’s UPS and cooling infrastructure, as well as human error and accidental EPO events, collectively account for nearly three quarters of the root causes of downtime reported by survey respondents with an average cost of more than $450,000 per incident. As such, for data centers experiencing an average of ten major or minor downtime events over a period of ten years, UPS, cooling and human error related outages can be expected to account for at least seven major or minor downtime events, with an average total cost in excess of $3.15 million.

How to Install New Server Racks

Nearly every business needs at least one server rack to house networking equipment, and some businesses might need several. However, unless you or someone

When you need to move server racks or cabinets to another location, you may think you’ll save time if you don’t unload all of