Trend Watch: What is an X86 Server:

This week I’ll be writing a two part series on the trend watch for X86 Intel Servers. As I’m sure you’re wondering, I’m aware that X86 processors are not a new thing. Yes, I know they have been around for the past few years and have been working their way into the industries heart as the processor of choice. However, with Gartner’s year-on-year survey conclusions and Intel’s March 6th release of their new E5-2600 series chips, there are a ton of exciting things to note and talk about. So with that I give you part one of Trend Watch: X86 Server Take Over; Intel’s New E5-2600 Series Chips.

It’s true X86 servers are not a new thing. They have been moving their way into data centers for the past few years and slowly, but surely have increased their presence, so much so, that they now dominate UNIX as the servers of choice. No longer are data centers a heterogeneous place, the variety of microprocessors that used to characterize our computer centers are now giving way to the uniform packs of X86 processors.

X86’s dominating presence is nothing new, as I’m sure you’ve been aware, their boxes have long since outsold UNIX and mainframes on a units-shipped basis. The biggest perpetuator causing UNIX to fall into the fiery pit of their demise came from Oracle’s 2009 purchase of Sun Microsystems, since then UNIX has slowly been sinking to its fiery death. In 2010, X86 servers represented the majority of server revenue as a whole, estimated by IDC at 66.1% in Q310. That folks was not just a trend, but instead the tipping point in an industry standard. 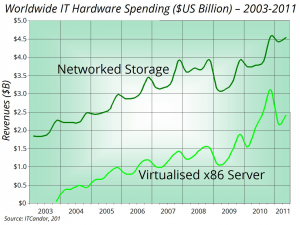 What is different about these servers, however, is that “Customers aren’t standardizing on a particular brand of x86 system,” said Dan Olds, principal at GCG. “Only a tiny number of customers have settled on a single x86 system provider, despite every effort by vendors to convince them to do so such as financial inducements, systems management that makes it easier to handle large numbers of servers from a single family, and blade form factors that would tend to yield a bit of vendor lock-in.” All vendors use the same AMD and Intel chips, the same RAM and the same disks, leaving the only differential, really, to price.

The Gartner survey, conducted in February 2012, analyzed year-over-year changes in server revenue and shipments, as well as percent market share, from server vendors like; IBM, HP, Dell, Oracle, Fujitsu, and Lenovo. They concluded that the primary driving force behind growth in the server market was the large scale deployment of X86 servers and the increase in cloud computing. Worldwide server shipments increased by 7% in 2011, with an increase of 4.5% in Q411. At the same time, worldwide server revenue increased by 7.9% in 2011, despite a decline of 5.4% in Q411. Pretty impressive stats, given the supply shortage caused by the October floods in Thailand, which caused inventory problems and greatly affected vendor’s ability to meet demands in Q4. 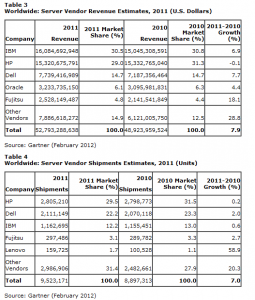 “The outlook for 2012 suggests that growth will continue,” said Jeffery Hewitt, research V.P. at Gartner. “These increases continue to be buffered by the use of x86 server virtualization to consolidate physical machines as they are replaced, but the introduction of new processors from Intel and AMD is likely to help fuel and initiate a new round of server equipment replacementcycles.”

With the release of Intel’s E5-2600 series chips on Tuesday March, 6 2012, the industry is about to see another huge round of server replacement cycles. In part two of this week’s blog, Trend Watch: X 86 Servers Take Over; Intel’s New E5-2600 Series Chips, I will give you all of the latest and greatest information on Intel’s newest chips, so get excited for the next post!