Intel launched its long-awaited Xeon E5-2600 family this past Tuesday, March 6th 2012. The new server chip is built on Sandy Bridge micro-architecture and was created to be compatible with 2- and 4- socket servers. It promises new levels of performance along with a set of capabilities never-before-seen on mainstream x86 severs. The new processors will not only be the heart of servers and workstations, but will also power the next generation of storage and communication systems from leading vendors around the world.

This is the first major industrial server equipment upgrade to the Xeon series since March 2010 and it is said to provide an 80% improvement in performance when compared to the previous Xeon 5600 series. Intel’s current portfolio of server chips includes low-end Xeon E3 chips based on the Sandy Bridge micro-architecture for servers with up to 2 sockets, and Xeon E7 chips for high-end servers, which has up to 10 cores and is based on the older Westmere architecture.

The new processor is aimed to meet the growing demands of cloud computing, consumerization, big data, and internet queries.

“The growth in cloud computing and connected devices is transforming the way businesses benefit from IT products and services. For businesses to capitalize on these innovations, the industry must address unprecedented demand for efficient, secure and high-performing data center infrastructure. The Intel Xeon processor E5-2600 product family is designed to address these challenges by offering unparalleled, balanced performance across compute, storage and network, while reducing operating costs,” said Diane Bryant, Intel vice president and general manager of the datacenter and connected systems group. 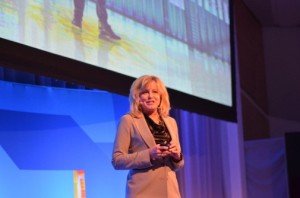 Bandwidth improvements have been built inside the chip to cut latency by 30%, which could help scale cloud deployments and the deployment of more virtual machines.

Intel estimates that there will be 15 billion connected devices and 3 billion connected users by 2015. Meanwhile, the amount of global data center IP traffic is forecast to grow by 33% annually, surpassing 4.8 zeta bytes per year – more than three times the amount in 2011.

The Xeon E5-2600 packs a lot of firsts. It is the first to integrate the PCI-Express 3.0 bus onto a processor, tripling the movement of data and reducing latency by up to 30%. In terms of I/O, it is the first to include Intel Data Direct, which allows Ethernet routers and adapters to route I/O traffic directly to the processor cache, reducing power consumption and latency. It supports up to eight cores per processor, with Hyper Threading effectively doubling that to 16 per socket. The new processors will also support more memory – up to 768GB in 24 slots – providing more DRAM for software applications and virtual machines to work with.

Intel correspondingly launched an Ethernet controller that brings 10-gigabit Ethernet closer to the motherboard, making it easier for companies to deploy the networking technology in servers. Server makers said that support for 10-Gigabit Ethernet at the motherboard level should shuffle network traffic a lot quicker in data centers.

Advanced Vector Extension (AVX) technology will help boost performance up to two times on compute-intensive applications like financial analysis and high performance computing, and the Xeon E5 processors will also come with a new version of the Turbo Boost 2.0 overclocking mechanism.

“The E5 will allow people on a standard data center footprint who have a limited power budget and footprint to do twice as much in the same footprint, because there’s a 50 percent greater efficiency,” said Steve Pawlowski, Intel senior fellow and CTO of the Digital Enterprise Group.

“For a company like Amazon to be able to provide tens of thousands of cores and not have to pay any more for the energy than they did before, while doubling the performance is huge. It depends on where you happen to be located, but energy costs roughly $1 million per megawatt, so anything that you can do to improve your performance and save is huge.”

Finally, the Xeon E5 family will now use Intel’s Advanced Encryption Standard New Instruction (AES-NI) to quickly encrypt and decrypt data running over a range of applications and transactions. The company claims that this, together with Intel’s Trusted Execution Technology, will help organizations protect their data centers against attack.

Intel has over 400 server designs with the new chip and IBM, Hewlett-Packard and Dell are among the first companies launching new servers. IBM claims its new two-socket BladeCenter HS23 is 62% faster, supports four times more memory and runs 20% more virtual machines than its predecessor, BladeCenter HS22.

Intel has already supplied E5 chips for a supercomputer called Stampede, which will be fully deployed in 2013 at the Texas Advanced Computing Center at the University of Texas. The supercomputer will deliver peak performance of 10 petaflops (or 10,000 trillion operations per second), with E5 chips handling 20% of the processing load, and a specialized Intel coprocessor called, Knights Corner, handling the other 80%. 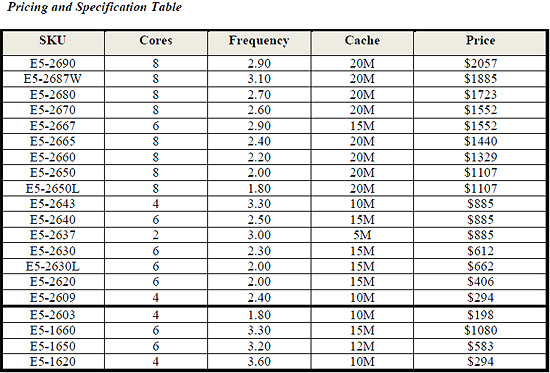