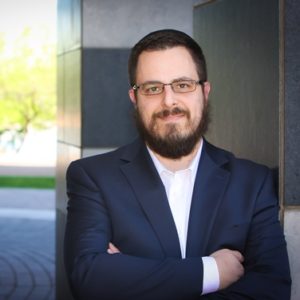 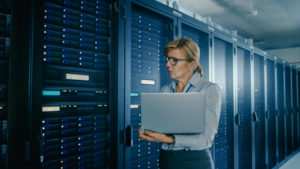 March was Women’s History Month, a marker of particular significance in the tech world. We thought this was a good time to highlight the vast opportunities in tech which can be filled by a wider range of candidates, including women. The data center market is predicted to grow by over $300 billion globally by 2024. At ServerLIFT, we work to ensure that women can go after these new, open jobs—and succeed—because our data center lifts level the playing field sufficiently.

Companies are competing more than ever for trained technical personnel. Fortunately, advanced technology is making more physical requirements a moot point (such as lifts that make it possible to remove, transport, and install a 300-pound server with the push of a button). To get a fresh perspective on this topic, we talked to April Turner, Senior Integration Services Manager with Groupware Technology.

Turner oversees a team that manages more than $200 million of equipment annually, integrating IT infrastructure hardware components for the data center. After 20 years in the tech industry, she sees plenty of room for more women in both entry-level and leadership roles. “I feel disappointed that there aren’t more women in tech,” she admits. “I think the industry needs the variety of both men and women.”

There are two main pathways to pulling this off:

1. Removing any obstacles to women doing this job, and

2. Encouraging a pipeline of more women getting educated and trained for IT jobs.

We’ll discuss some of the physical job requirements for roles in tech, how to attract the most qualified people to your business, and how to provide the appropriate mentorship to retain and upskill your hires.

Are There Physical Barriers in Data Center Roles? 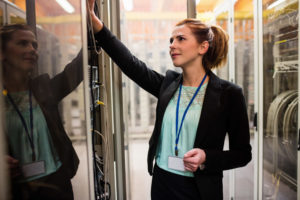 Surprisingly, the answer is yes. Turner’s integration lab is not a data center, but they build an average of 280 racks a year for data centers worldwide. “We do a lot of physical work in the lab, but the difficult part is getting the servers into the racks. Keep in mind that the racks we build are typically a 48U rack, 7-8 feet tall. It’s not just the servers down low or the servers in the middle,” Turner notes.

In a previous post, we noted that the maximum recommended lifting weight for both men and women from OSHA, NIOSH, and the CDC is the same: 51 pounds. Turner says even that amount is not relevant, when a ServerLIFT رفع مركز البيانات is used. This is more than adequate physical lifting assistance. “It’s just a matter of doing some physical work. You’re still moving around, building stuff all day long, but with a motorized data center lift, it takes the difficult part of it out.”

Getting Women Interested in Technology and Data Center Jobs

With physical restrictions overcome, what is stopping women from developing an interest in and applying for a hands-on career in the tech world? In the dozens of applications Turner has reviewed, female applicants are rare. “I think the barrier is in even getting them to the table; in getting them to be interested in this type of work.”

She recommends improving outreach at the collegiate level, saying that internships and mentorship opportunities should be presented to women with regularity, so that they know data center jobs are attainable and offer opportunities for growth. Of note: nearly every university and college has their own (sometimes partially student-run) data centers. There is always an opportunity for students to get a taste of the industry while they’re still in college by getting involved with their campus DC.

Outreach is a crucial factor in getting women into the data center. Neira Hajro, Partner at McKinsey Digital, agrees. She tells Data Economy: “Let’s recognize that we all need sponsors. Having a strong support base will allow each and every one of us to thrive in the workplace if our skills and contributions are recognized and valued.”

Part of the problem is the high-security, low-profile nature of data center operations. Making the industry more widely known to the general public can make a big difference. “Women in tech can have the same skill sets, knowledge, and the background that men do in order to do this job,” says Turner. Opportunities to acquire these skill sets and appropriate education can be made more widely available. 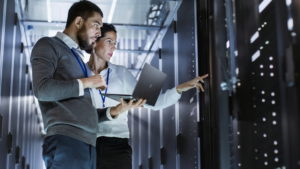 Retaining women in tech is an additional challenge. “It really takes a strong individual with the right disposition to be amongst mostly men, and feel like you are contributing equally,” says Turner. Kristin Zhivago, a Silicon Valley veteran who has worked in tech for 40-plus years, has found that competence is accepted equally by any worker, male or female. “It’s a matter of doing your job well and not paying much attention to differences. Both men and women must earn respect, and the best way to do that is to take the job seriously and to learn continuously.”

Once a woman has the tools and opportunity to do a traditionally male-oriented job, fostering growth is the next step. INAP SVP of Global Cloud Services Jennifer Curry agrees; she tells Data Center Dynamics that companies do best when they both give women a seat at the table and then actively foster their development. Of course, this is also the responsibility of the woman involved. The women we know in tech tend to take this responsibility seriously.

Even companies reporting gender diversity still see women claiming fewer than 1 in 4 technical roles. There is room at the table and a big need—since most companies are fighting one another for the best available talent.

As a company, ServerLIFT is committed to making solutions that take the physicality out of a task that shouldn’t be physical. This allows for a level playing field, so that virtually anyone can work in a DC (which requires the handling and installation/removal of heavy server equipment). It creates equity in access to those jobs by anyone, not just young, able-bodied men. That includes women, older workers, and some physically challenged or disabled workers. Our own company has many women in a variety of roles. They were hired because they were the best candidates, and they are doing a fantastic job.

Help us to continue the conversation about women in the IT infrastructure industry on our LinkedIn سلامة مركز البيانات group and on تويتر.

Cisco, an American multinational tech conglomerate, was founded in 1984. Married computer scientists Len Bosack and Sandy Lerner were at Stanford University at the